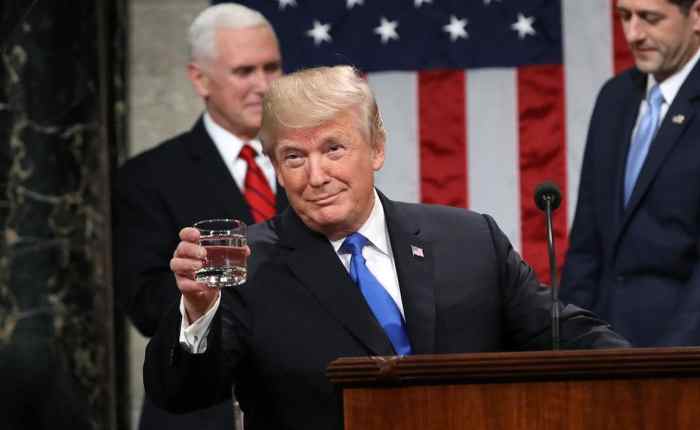 At the Washington Walrus, we recognize that it can sometimes be difficult to keep up with the latest in baffling tweets, nonsensical decisions, and eh… “reverse psychology” employed by the Trump Administration. One story may change from one end of the day to the next. So, we thought, it’d be handy to save you the hassle of sorting through this all and give you the main talking points that dominated this presidency in 2018 (year 2) with some colorful commentary.

And there you have it! Quite a year, huh? Of course, this only scratches the surface. There was also the beginning of a trade war with China and many other resignations/firings. Or how about that meeting with Kim Jong Un? Yes, even though it was one year, a lot happened but what seemed to dominate thematically and quite literally were:

These themes will probably course over into 2019, a year in which the stakes will undoubtedly be amplified considering the momentum of Mueller’s investigation and the fact that the Democrats will take lead in the House of Representatives. But will it be an easy road for liberals then? Or will Trump’s base fight back, feeling the victims of persecution in both a political and cultural war? And what can Trump do/say to shock us at this point. Well, here’s a few things for 2019 we predict: 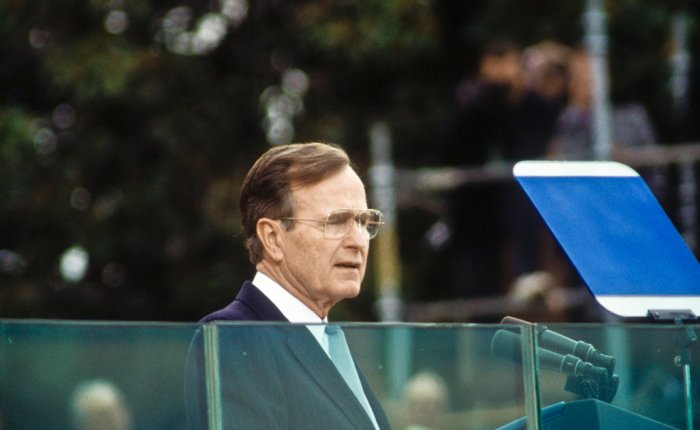 George H.W. Bush one said in an interview that the “L” word was banned from his household in regards to defining his legacy and part played in history. His humility, today, seems all the more gratifying and admirable for the Sasquatch who now occupies the White House and the incessant stranglehold of political tribalism gripping America. Bush was, in many respects, a classic conservative but like McCain (who passed earlier this year), he tempered the extremists of his party. (He could also take a joke- inviting Dana Carvey, who impersonated him on SNL, to perform at the White House upon re-election defeat in 1992.) He raised taxes at great political cost. He formed a lasting friendship with the man who beat him in his re-election bid. He even voted for Hillary Clinton in 2016. This man, to many, seems like the last of a dying kind.

In 1989, the world transformed with the fall of the Berlin Wall. What seemed an unlikely reality mere years ago quickly materialized and a steady hand was needed to oversee the end of the Cold War. Bush was the perfect man for this. His mother had instilled in him from an early age the idea to never brag and take any successes as a team’s, not his own. To be fair, Bush wasn’t responsible for what transpired across Eastern Europe or in Russia, credit or fault (depending on who you ask) belongs to a great many but for a US president to not drag this out as a triumphal moment took remarkable tact and restraint. “I’m just not an emotional kind of guy” he remarked, almost disinterested, when pressured by the press. Gorbachev certainly appreciated this. Relations between the US and Russia had never before (or since) been so cordial. This respectful line of diplomacy would prove instrumental in German reunification in the succeeding couple of years.

While he may have averted the world’s gaze from his own mantle however, he wasn’t ready to let America slip by the wayside in its foreign policy. The New World Order, as defined by the end of the Cold War, would see America stand up for sovereign nations being aggrieved across the world. To the World War 2 Generation, this may have seemed admirable, especially with despots like Noriega (in Panama) and Saddam Hussein pushing their luck. To many others however, this marked the beginning of a sinister role for their nation; world police.

The Gulf War of 1991 however was no Vietnam. It was a quick and altogether successful operation, as set out by the Bush administration, which resulted in the liberation of Kuwait. Critics on the left may have questioned the legitimacy of this war (albeit to a lesser extent than his son’s) and pointed to instances of civilian casualties as war crimes. Critics on the right may have argued that the US should have gone into Iraq and overthrown Saddam. Both voices of dissent were largely drowned though by the majority when Bush’s approval ratings shot to an unprecedented 91%.

So how, just over a year later, did such a popular president lose re-election? There were a wide variety of reasons, chief among them; a recession caused by Reaganomics, the entry of a third-party candidate into the race- Ross Perot, and the perceived image of Bush as a man out of touch. Particularly in the case of the latter factor, the Bush Administration’s take on the AIDS crisis and the War on Drugs are remembered unfavorably but he was also seen as a president far more interested in foreign policy than domestic. This is understandable given the Gulf War, Panama, and Somalian interventions, as well as all the changes occurring across Eastern Europe but Bush deserves a little more credit here, in my opinion. There was for one instance, a Clean Air Act, which seems out of place in a Republican’s administration. There was the tax compromise, aforementioned, which eschewed politics in favor of national interest (earning him years later, a Profile in Courage award from the Kennedy Center.) Then there was also the American with Disabilities Act of 1990 which gave legal protections to people with disabilities, previously unaccounted for. This doesn’t often get mentioned but is a key piece of Civil Rights legislation.

Despite all this,  Slick Willy Clinton really was able to capture the spirit of the country at the time with his “I feel your pain” moments, saxophone solos, and direct intern management. The 1992 election got fierce and Bush felt the blow personally for years after but he always refrained from criticizing his successor, wishing him the best of luck from day one with a now viral letter (below).  He spent the rest of his life, mostly out of the spotlight, save a couple humanitarian relief efforts with Bill and parachute jumps on his birthdays (the last one on his 90th in 2014).

Historians, he once noted, “will point out what we did wrong” and “perhaps, some of the things we got right.” Has a former president ever put it so simply yet brilliantly? One can certainly argue the proportions of these wrongs and rights and yes, one certainly should not do it, merely by comparison to Trump (a benchmark set so low it goes without bothering with) or his son (their approach to Iraq was fundamentally different). It’s definitely a mixed bag, as is the case with most presidents. The impression, I always got of this man however, was that he truly wasn’t obsessed with his legacy or bragging rights. He served 58 air missions in World War 2 (when with his rich connections, he probably could’ve avoided service), took some thankless tasks (chairing the RNC under Nixon, fathering “weak-sauce” Jeb), and acted as a public servant, rather than a typical calculative politician. Even putting aside today’s dark climate, this is the kind of leader we’re unlikely to ever see again.