Lessons From The Lewinsky Scandal: 20 Years On

20 years ago, the scandal that would define the latter part of the Clinton presidency broke on The Drudge Report. With the advent of the Internet Age, this story would take on a life of its own, exposing a changing media and political landscape traceable right through to today. Although the focus of the scandal would consume the next year’s news, resulting in the impeachment of the president, its elements and themes remain ever prevalent. In retrospect, we can now understand just how significant this cultural moment was for a) partisan politics, b) media sensationalism, and c) the online community / cyber bullying. Just how, you ask?

To be fair, 1998 can hardly be pointed to as the year in which partisan politics turned ugly. It’s not even when tensions began to spark between the Clinton Administration and the Republican majority. It is, however, reasonable to identify it as the year in which these tensions took a hold of the national consciousness and shifted the focus away from the issues to the ideological fronts on play. In establishing the impeachment process against Clinton in December 1998, the Republicans ushered in a new breed of malice that would become commonplace over the course of the next 20 years.

Of course, Clinton survived impeachment and his approval ratings even soared as the public saw past the petty under goings of the Ken Starr investigation but the bar for civility in politics was undoubtedly lowered. From thereon, the creed of the Republican Party became largely associated with winning on any level, as opposed to winning on the issues. Thus, support for Trump. 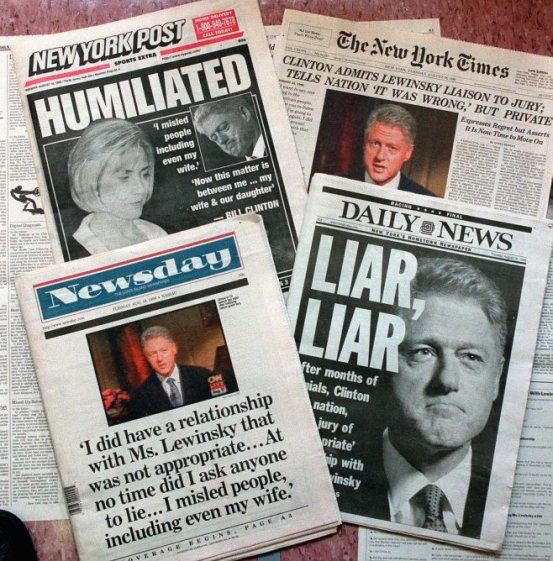 Again, 1998 wasn’t the year sensationalism in the media was born but it easily got vamped up a notch as every sordid detail was covered in this case- from the blue dress to the definition of what sex is (“it depends on what the meaning of the word is is”- smooth Bill, really smooth).

Now, I’m not saying it’s in any way appropriate for the president to have an affair on the job but to be fair, a president’s always on the job and it’s a private matter. The media loves a scandal, of course, so in many ways Clinton can be blamed for digging his own grave. (It is conjectured by many that he’s a self-saboteur.) What many pundits, anchors, and journalists failed to recognize (or rather, chose to ignore) at the time however was a) how distracting their constant coverage was to the political and legislative process, b) how distracting it was from serious issues that could have been addressed- e.g. the growing threat of terrorist activity or the rise of Smash Mouth, and c) how damaging it was to a young woman (which we’ll cover in a moment.)

It’s one thing to make a case out of a proper injustice in the system (e.g. Watergate) but unlike any scandal beforehand, save that, this was covered with more gall and obsession than could ever be justified. And whilst being frank about it, let’s put to rest the claim that Clinton’s evasiveness and lies damaged the moral fabric of America. Yes, he was wrong but also politically motivated like any of the Republicans going after him, to save his own ass so that important things could be accomplished. Of course, many of his greatest opponents, like Newt Gingrinch, would later come under fire for their own affairs. Somehow, that just didn’t leave the same mark on the mass media’s blueprints however.

Today, you only have to load the comments’ section on any Youtube video to encounter the ugliest, most vile, and seemingly illiterate people around. In some ways, Monica Lewinsky was patient zero for this new wave of bullying (at least on a national level) and it took a long time for her to come to grips with what had happened, especially because the focus turned to her so immediately. As she remarked in her 2015 TED talk; “overnight I went from being a completely private person to being completely publicly humiliated.”

It could be argued that she hardly helped the situation. She, of course, had an affair with a married man and later admitted to having done this before, all whilst under the delusion that this could result in an actual partnership, swayed by the charm of old Slick Willy. (She even kept the dress…) Her mistakes were her own but the backlash was insatiable, as she struggled for years to find work and at every corner, was reminded of the shame she had brought upon herself and her family.

Years later, she became an activist against cyber bullying, relating her own experiences to those targeted on social media and other platforms: “I couldn’t count how many horrible things people online had said about me, but I could count when somebody said something face to face on one hand.”

This is symptomatic of what’s going on today and ties in with the points above, in illustrating the inner portrait of America that was being painted a la Dorian Gray style. I’m not saying things were perfect before this happened but in these three respects, they were a little nicer and political relations were a little more civil. When you lower your standards, it only gets harder to reach for a higher platform. Trump, the modern GOP, social media, and mass media have largely followed this line to to its natural next breach and where it goes next is beyond daunting.